Would you like to switch to the accessible version of this site?

Don't need the accessible version of this site?

What is Periodontal Disease 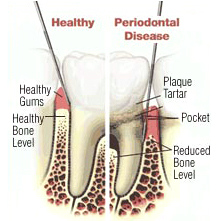 Plaque is the yellow substance that sticks to your teeth and, if not brushed and flossed away, results in tooth decay. Gums that are swollen and bleeding indicate that they’re infected with the bacteria found in plaque.

Swollen and bleeding gums are an early sign of periodontal disease. Eventually, plaque will spread below the gumline, where it’s difficult to remove. When your gums swell, a space is formed between the gums and teeth, encouraging more bacteria to grow. If left untreated, periodontal disease can cause teeth to become loose and eventually destroy the supporting structures of the teeth.

If left untreated, gingivitis can lead to a condition called periodontitis. The plaque that gathers along the gumline hardens into a substance called tartar or calculus. This accumulation causes gums to pull away from the teeth, forming “pockets” where food particles and bacteria gather. The supporting gum tissue and bone become infected and are eventually destroyed, leading to pain, discomfort and tooth loss. T 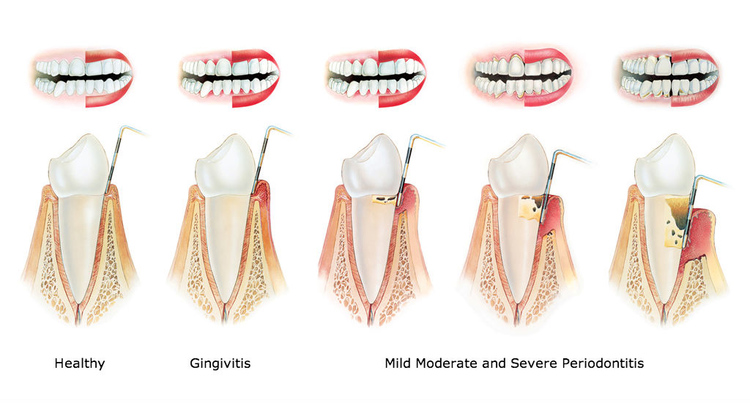 here are often warnings of periodontal disease, including bad breath, reddening of the gums or bleeding from the gums when brushing your teeth. More serious symptoms include tender or swollen gums, spaces or pus between teeth and the gumline, and receding gums that make your teeth look longer.

Even those who take meticulous care of their teeth can experience periodontal disease. Certain people are more susceptible to this condition, including diabetics, tobacco users, and those who clench or grind their teeth.

We are looking forward to hearing from you!

Find us on the map

Find Out When We Are Open